Oh man, do we live in interesting times.  Thanks to the internet, human beings in modern society are pummeled with information and advertisements practically all the time.  It can be a lot to handle.  In fact, it can get downright overwhelming.  We’re constantly trying to decipher the useful from the useless (our blog falling into the former, of course).  And that includes movie trailers.  Recently, a teaser trailer for Star Wars episode VII hit the internet, and my counterpart wording droid, Andy Primm, thinks that it is a huge pile of bantha poodoo.  I disagree, mostly, and shall be addressing his grievances point by point:

1. The Title is Fine.  The Force Awakens.  The Force…Awakens.  The Force AWAKENS!  OK, the word is starting to not sound like a word anymore, but still, the title is perfectly fine.  This is the beginning of a new story, so just like the very first Star Wars movie did with “A New Hope” (even though I know that it was added later and was originally just called Star Wars), this title is evoking questions, rather than explaining the plot.  It makes us wonder, it grabs our attention, and it makes us remember that the Force is something to be reckoned with.  If it is awakening, then that means that something momentous has, is, or will be happening.  It’s like a volcano, it’s been lying dormant for some reason, and now that it’s waking up, shit’s gonna go down.  Would it be better if it was titled “Luke Comes Back” or “Chewie Eats a Person”?  I mean, maybe, yes, probably that last one.  But as it is, The Force Awakens is a good title that sparks interest. 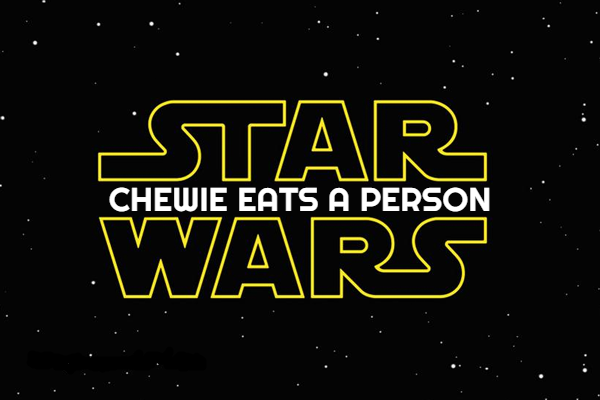 2. Lightsaber with the hilt guard.  I’m not going to spend much time on this one, as it’s been done to death everywhere.  The blade continues inside the metal part, so another lightsaber would run into blade when it cut through the metal.  It’s a more interesting visual than the run-of-the-mill lightsaber and it does make sense.  Also, a jedi wouldn’t just accidentally cut himself while using it, as they are highly skilled combatants who use the Force, so moving on!  (For more information, see Stephen Colbert.)

This is a simple, practical solution to hands getting chopped off! And it looks cool! Why didn’t I think of this sooner?!

3. No Actual Wars in the Stars.  I mean, technically, that’s true.  There are no space battles in the teaser trailer.  But who really cares?  They’re on planets that aren’t Earth, aren’t they?  They’re in a galaxy far far away, right?  I think that any battle that doesn’t take place on Earth could constitute a “star war.”  I mean, don’t get me wrong, this might actually take place on Earth a long long time ago, but I doubt it.  They’re most likely other planets, and the ships doing battles on other planets still count!  We also know that these ships can perform in atmosphere, we’ve seen them do so many times.  Even TIE fighters flew around Bespin, chasing the Falcon.  It was a thrilling scene, and hopefully the new movie will be able to channel some of that excitement!  Based on the teaser, it looks to be doing a good job!  Also, we’ve already seen space battles!  Tons of em!  Let’s get some more surface dog fights and bombing runs!  New!  Different!  Though hopefully not every shot is as disorienting as the one of the Falcon in the teaser.  While I liked it, a whole movie like that would get old quick.

Don’t watch it for too long, or you’re going to Ackbar all over your keyboard.

4. That Adorable Little Rolling Droid.  I love this little guy already.  It’s super cute and a new, interesting design.  It’s not your tired old R2 or R5 unit, it’s a little soccer ball of astromech that probably will save the day more than once!  Who knows what this thing is capable of?  It clearly has a can-do attitude and will overcome any obstacles put in its way, despite its small size!  I’d love to have this hamster ball of badassery rolling around with me all day!  Some might say it has limitations because it’s a ball, and steps would present a problem, but I say that you underestimate it!  I say that it will roll over your presumptions and be friggin face-meltingly endearing the entire time!  They showed us this droid because they want us to realize the best in ourselves, and this droid can show us how.  Also, because cute.  But mostly because it can help us be the people we are supposed to be.

Yeah, buddy, let’s go! You’re right, I can do anything I put my mind to! Yes, I have lost a little weight, thanks for noticing!

I think that this teaser did a fantastic job of getting myself and others excited for this movie.  The speedy new X-wings, the stormtroopers on the ship, the hilted lightsaber, the black guy that everyone’s upset about (stormtroopers aren’t all clones, they also get recruited, get over it you racist nuts), all of it was titillating in the best way.  The visuals look great, the feel of everything is familiar yet new, and I can’t wait to get to know the new characters in this very old world!  Especially Dodgeball Droid™, my new best friend.

2 thoughts on “Aaron’s Rebuttal to Andy’s Grievances With the Star Wars: The Force Awakens Teaser Trailer”