It’s Debate Day, and this week we’re crowning the best movie of 2014. Despite the fact that no movie in 2014 could touch Wes Anderson’s Grand Budapest Hotel, Aaron thinks Marvel’s Guardians of the Galaxy was better. As usual, he’s delusional, because Grand Budapest was unquestionably the finest film of the year. Be aware that as I cut Aaron’s arguments to ribbons, there will certainly be

1. Hilarious comedy. I was not expecting Grand Budapest Hotel to be so funny. Wes Anderson’s movies usually have some good laughs, but Grand Budapest is easily his funniest movie to date. Ralph Fiennes steals the show in every scene, and I’ve never laughed harder just from someone saying the word “fuck.” A lot of the humor is simply people acting goofy and cursing at each other, but there’s plenty of sight gags and physical comedy too. The movie has its moments of gravitas and an undercurrent of the impending World War II, but it’s basically a madcap comic adventure where everything seems to work out. Guardians of the Galaxy definitely has a lot of good jokes, but it also has parts where the evil guy smashes a dude’s head with a hammer. There’s a lot of serious action movie melodrama that happens, which is awesome, but it leaves less time for comedy.

2. Engaging characters. Ralph Fiennes deserves an Oscar for his performance as Monsieur Gustave. He’s one of the most compelling characters I’ve seen on screen in years, and I quickly found myself heavily invested in his story. Tony Revolori is adorable as Zero, the lobby boy in training who draws on his own mustache with a grease pencil every morning. Saoirse Ronan is good as Agatha, Zero’s love interest, even if she’s overshadowed a bit. The supporting cast is fantastic, featuring the likes of Willem Dafoe, Edward Norton, Adrien Brody, Jeff Goldblum, Mathieu Amalric, Harvey Keitel, Jude Law, Tilda Swinton, Jason Schwartzman, Owen Wilson, Tom Wilkinson, F. Murray Abraham, and Bill Murray. That’s a lot of awesome actors, and they all get used perfectly. Guardians has a great cast, but the ensemble nature of it means you don’t spend as much time with each character. It’s hard to get very invested in, say, Drax or Gamora, because we don’t have time to get to know them. 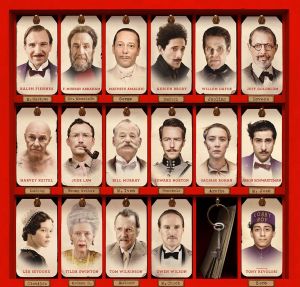 3. Emotional Impact. For all my talk about how funny Grand Budapest is, it also has some really serious and mature themes laced throughout. While the main story of the movie is mostly a wacky comedy, the frame story reveals a much darker side to everything, and suggests that the narrator’s memories of happier times have colored his account. M. Gustave’s happy ending, where he is exonerated and becomes owner of the Grand Budapest, is all too short. We learn from the older Zero that Gustave was executed a few years later by the film reality’s version of Nazis. Agatha and Zero were married, but she died shortly afterwards in childbirth. Zero now owns the hotel, but it stands as a vacant mausoleum of the happiness he once had. The comedy of the movie is belied by the sobering reality of later events. Guardians certainly had some feels, especially when Starlord’s mom dies of cancer at the beginning (which definitely had me tearing up), but beyond that it only has typical action movie tension where you pretty much know the team will come together in the end and everything will work out.

4. Art Direction. I love movies with computer graphics, as long as they have an engaging style and show some restraint. Guardians uses CG really well, to the point where it often blends seamlessly with the physical sets and props. However, I’m an old-fashioned guy, and CG doesn’t impress me nearly as much as constructed sets and practical effects, which Grand Budapest is full of. It features incredibly rich set decoration, especially for the titular hotel, and everyone in the art department deserves commendations for their work. Wes Anderson’s habit of stuffing tons of lush details into his symmetrical shots works better in a splendid 1930s hotel than it ever has before. The effect is compounded when we get to see how drab and modern the hotel has become by the 1960s. Seeing a movie like this makes me feel like I could actually go to this place and sit on the furniture. I feel more transported to the Grand Budapest Hotel than I do to the Knowhere outpost simply because one is real and the other is full of computer effects.

Don’t get me wrong: I love Guardians of the Galaxy. It’s a fun movie with wonderful characters and intense action sequences, and I’ve had Blue Swede’s “Hooked on a Feeling” stuck in my head for about six months now. Still, it just doesn’t match up to The Grand Budapest Hotel. It’s Wes Anderson’s finest work, and every aspect — acting, directing, set design, costumes, cinematography, editing, you name it — works perfectly. The movie is replete with byzantine attention to detail, and nothing in 2014 even compares. If you haven’t seen it yet, take my word for it, folks: it’s really damn good.

2 thoughts on “Best Movie of 2014: The Grand Budapest Hotel”