In recent years, one television show has stood out amongst its peers as an incredible work of drama, a fascinating character piece, and a truly remarkable work of stellar storytelling: Breaking Bad.

The show told the story of Walter White, a high school chemistry teacher, and the consequences of his decision to begin cooking meth after he discovers that he has cancer and no way to pay for treatment.  The show gave us some remarkable storylines, high-tension drama, and beloved and hated characters.  There’s one character, however, that has received a lot of unwarranted hatred, and today I am here to defend her.  That character is Skyler White.

My co-cook, Andy, would have you believe that she is an unnecessary character, devoid of interesting traits and motivations and a detriment to the show.  I could not disagree more.  Without Skyler White, Walter White is meaningless.  To read up on his side, go here: Incorrect Things.  Now, let me tell you why Skyler is probably the most important part of the brilliant Breaking Bad mosaic.

Breaking Bad Spoilers ahoy! (If you haven’t watched Breaking Bad, go do so now and come on back!  It’s so good!)

Aside from Anna Gunn’s fantastic performance as Skyler White, the reason that Skyler is one of the most important and great characters boils down to one thing: Skyler is morally opposed to cooking meth, as she should be.  This puts her in direct contention with Walter, who is our main character.  If she didn’t exist, then there would be pretty much noone to oppose Walt.  Walt’s family wouldn’t exist, nor his DEA brother-in-law, and he would not be in this position to begin with, or have no reason to hide his meth operation (You know, having a family and responsibilities).  He could just go about his meth-cooking ways, without much of a care in the world, making money with Jessie and paying for his cancer treatments.  *YAWN*  The family, especially Skyler, gives Walt’s story some actual substance.

She also would never do this.

Andy would say that she’s not a well-crafted character, as most of her story arcs revolve around Walt, with her having no motivation or desires of her own.  I counter this by asking: is keeping her family healthy and happy not a desire or compelling story?  Is that motivation invalid?  Simply because she is a mother of sound mind while Walt slowly goes insane throughout the show doesn’t mean that she’s not a good character with wants and desires of her own.  She wants to make sure their son, who required special care growing up, is safe and becoming a good man, and she wants to make sure that their unborn child is coming into a complete, happy family.  Then she also has to take care of Walt, who clearly is becoming undone by his disease (or so she thinks).

She wouldn’t do this, either.

Skyler is important because she behaves as Walt should have from the beginning.  It is paramount that we see someone behaving this way in order to illustrate just how far from it Walt actually strays.  It’s important that we see someone who is doing everything they can for their family so that we know how false it is when Walt says that everything he’s doing is for the family.  We see a woman who goes back to work while Walt quits the car wash and gets fired from teaching high school.  We see a woman who kicks her lying husband out to try and protect her children from his toxicity.  We see a woman manipulated by her monstrous husband into becoming complicit in his activities.  She provides the counterpoint to compare all of Walt’s horrible actions to.

And this is right out.

I know that many would bring up how selfish she was, fucking Ted and giving him Walt’s money, but I never said that she was a perfect person.  She made life more difficult for Walter, but only in so much that Walter put them all in a horrible position in the first place.  It’s easy to forget that, even though he is our main character, Walter White is not a good person.  It’s something to applaud the writers for, as we often forget that Walter White is a monster throughout most of the show, completely reprehensible.  He is a selfish, proud man who doesn’t make decisions in the best interest of his family, and it drove Skyler not only away, but to the brink of a psychotic break.  Were he not off cooking meth and lying to his family, Skyler wouldn’t have fucked Ted, much less given him any of Walt’s money.  Had he not turned down the job offer from his old partners, Skyler would never had even had to take the job with Ted in the first place.  Hell, if I found out my husband was doing what he was doing, I would demand a divorce and fuck my handsome boss, too.  And if I were stuck with that man, I would probably try to drown myself in a swimming pool, as well.  Call for help, anyone?  Morons?

I also know that many would bring up that she’s a bitch, she’s always complaining and making Walt’s life hell, she never shuts up.  People who make this complaint should try living with a lying meth cook and see how they hold up.  Skyler White is a saint.  A Goddam saint for putting up with what she’s put up with!  If she had divorced Walt and turned him in, I would have given her a standing ovation.  But she didn’t, as she was worried about her family, Walt Jr. and Hank.  Walt Jr. would be destroyed and Hank’s career would suffer greatly, if not be completely over.  It was a moment of weakness out of love, but I think she absolutely is justified in everything she says to him, bitchy or not. 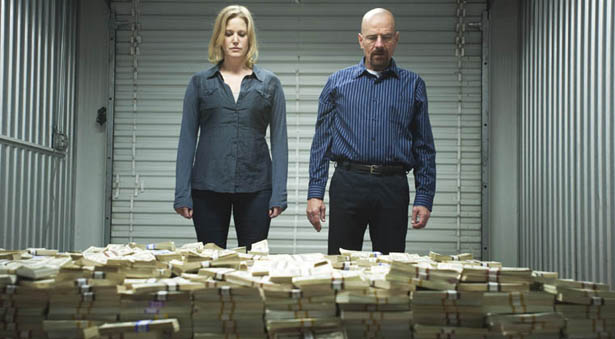 She did do this, though.

We also see in her the corrupting influence that Walt has on the people around him.  She, even after everything he put her through, still becomes complacent in his activities.  She helps him buy the car wash and use it to launder money.  She helps him not get caught.  She covers up for him, making excuses to their family.  We see how Walt is a master manipulator through Skyler, and it’s only after a long time and several deaths that she sees just how terrifying a man her husband truly is.

But she does see.

In the end, Walter and Skyler meet one final time, and Walter finally admits to her that he lied every time he said that his actions were all for his family.  He knows that he was doing it for himself, as she has known all along.  She is the one who was truly trying to keep their family together and their children safe.  Walt has ruined their family and their lives, but we can see that Skyler is strong enough to carry on for her children.  Walt ran.  Skyler stayed.  You can root for Walt and Jessie to outwit the drug cartels and Gus and the DEA and the nazis, and that’s all fun (and honestly more interesting), but I know that, at the end of the day, Skyler is the true hero of the story, and without her, Breaking Bad has no meaning.

2 thoughts on “In Defense of Skyler White”