Aliens in movies hold a mirror up to our earthling sensibilities and reveal something about ourselves. Whether it’s inner clarity or a horrible truth, the otherworldliness of movie aliens allows us to step outside ourselves and consider our lives from a stranger’s point of view. The best movie aliens are guides that show us the way to happiness or enlightenment. No alien embodies these qualities better than Yoda. 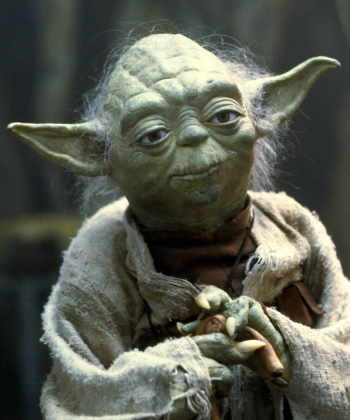 Size matters not. Look at me. Judge me by my size, do you?

Spoilers ahoy! Although the likelihood of not having Star Wars spoiled for you is pretty slim at this point.

When Luke Skywalker first meets Yoda in Star Wars Episode V: The Empire Strikes Back, he mistakes the diminutive green creature for a primitive species. Luke encounters Yoda rummaging through his belongings after arriving on Dagobah, and writes off Yoda as nothing more than a nuisance. But Yoda, knowing that Luke has come to Dagobah in search of him, strings the would-be Jedi along with a promise to lead him to the lair of the Jedi Master.

Yoda uses the opportunity to assess Luke’s aptitude as a Jedi. The deception lets Yoda see how Luke would behave when not in the presence of the venerated Grand Master of the Jedi Order. Yoda has no pride or shame, and has no qualms with being viewed as a buffoon. When Yoda first offers Luke help, the young Skywalker spurns it at first, saying that he’s looking for a “great warrior.” But Yoda replies, “Oh! Great warrior. Wars not make one great.” This is the first lesson for Luke in understanding what it means to be a Jedi. 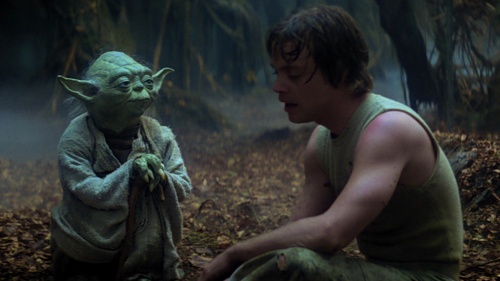 Of course, Yoda eventually reveals himself to Luke, and the training begins. Luke is headstrong and impetuous, obsessed with becoming stronger and defeating Darth Vader. But Master Yoda counsels patience and circumspection, and crafts his lessons for Luke around humility and endurance rather than martial prowess.

Luke has come to Dagobah with a preconceived set of notions about how the Galaxy and the Force work. Part of Yoda’s job is to show Luke that the universe isn’t as simple as he thinks it is. He instructs Luke to unlearn what he has learned and start over fresh. Only by questioning his assumptions can Luke truly come to understand the Force.

One of the tasks Yoda sets for Luke is raising his X-Wing from the swamp using the Force. Luke is unable to do it, and complains that the X-Wing is too big. To prove to Luke that size matters not, he performs the feat himself. An incredulous Luke says, “I don’t believe it,” and Yoda replies, “That is why you fail.” 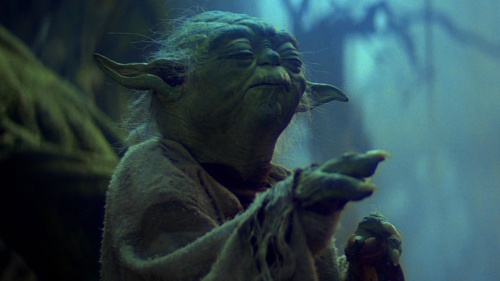 Yoda refuses to teach Luke offensive techniques. Though Jedi Knights fought to defend the galaxy, they did so only as a last resort. As Yoda says, “A Jedi uses the Force for knowledge and defense, never for attack.” Luke’s obsession with killing Vader will lead him to the Dark Side if he doesn’t let it go, a point driven home by Luke’s battle with the shade of Darth Vader in the Cave of the Dark Side. When Luke cuts down the shade, he sees his own face behind Vader’s black mask.

Perhaps Yoda’s greatest lesson for Luke, and for us, is to never waver in our confidence or resolve. It’s good to ask questions and consider a situation from every angle, but when the time comes to act, we must be swift and sure. For a Jedi, there is no room for wavering in a crisis, or worrying about one’s own abilities. “Try not,” says Yoda. “Do, or do not. There is no try.” 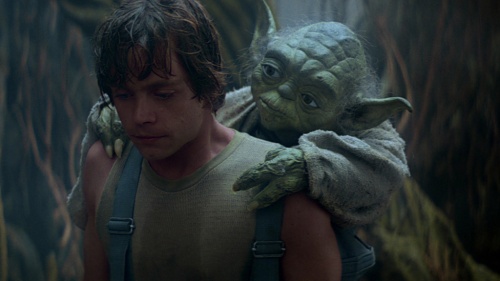 Yoda and the Force Ghost of Obi-Wan Kenobi also work together to show Luke that death is nothing to fear, but merely one step in the universal cycle of life. “Luminous beings are we,” explains Yoda. “Not this crude matter.” Obi-Wan’s appearance as a ghost proves that becoming one with the Force is an essential part of a Jedi’s journey to enlightenment.

Headstrong Luke leaves Yoda before his training can be completed, anxious to save his friends and confront Vader. When Luke returns to Dagobah a year later, in Return of the Jedi, he’s come too late. Yoda is dying. But the old Grand Master recognizes that Luke has learned a great deal from his encounter with Vader in Cloud City. The loss of his hand and the shock of the knowledge that Vader is his father has taught Luke the value of Yoda’s lessons about humility and expecting the unexpected. Yoda tells Luke that his training is complete, but has one last bit of knowledge to impart: that all things must eventually end. “Twilight is upon me,” says Yoda, “and soon night must fall. That is the way of things…the way of the Force.” 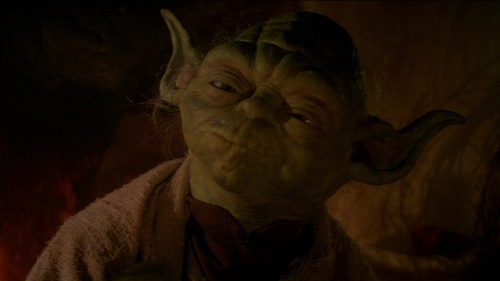 When nine hundred years old you reach, look as good you will not.

Okay, so there’s also some stuff about how Yoda’s a master of lightsaber duels and leads armies of clone troopers into battle. Honestly I hate this crap because it flies in the face of what makes Yoda so great. Yoda isn’t a clone warlord or a supreme swordmaster. He’s a tiny, unimposing elf who’s completely devoted to the cause of peace and harmony. As far as I’m concerned, the Yoda of the prequels isn’t the same character, even if they went to great lengths to mimic Frank Oz’ puppeteering style.

The Yoda I love teaches Luke and the audience simultaneously. Yoda is like a short, green Lao Tzu, constantly dispensing universal wisdom that’s equally as applicable to our own lives as it is to Luke’s quest for galactic justice. Yoda has remained such a recognizable and beloved character for so long because he’s the opposite of what we picture when we think of a great hero. His message one of understanding. If we can remain humble while believing in ourselves, anything is possible. That’s what makes Yoda the best alien to ever appear on film.

28 thoughts on “Yoda: The Best Benevolent Movie Alien, He Is”