So I decided I wanted to play a classic Sega Genesis game, and going through the list of games I have at my disposal, I came across one that sounded familiar but I had never actually seen or played at all: Ristar. 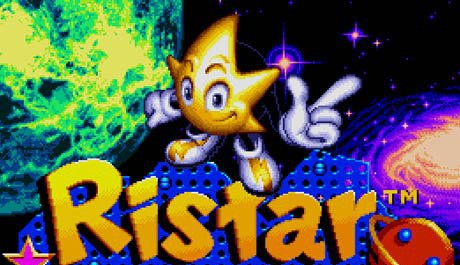 Again, I went into this game knowing next to nothing about it.  I had a screenshot of a platformer and that’s about all.  So what did I think of this game?  Meh.

As I said, it’s a platformer, but it’s not anything special.  You don’t run, you walk about, which is annoying because even Mario, a fat plumber can run, and you use stretchy arms to grab enemies and bash your face into them to defeat them.  But don’t accidentally walk into them, because that hurts you.  Just grab them and smash your face into their face as hard as you can, cuz that hurts them and not you.  Why does a star have stretchy arms?  No idea.  It’s not a mechanic that makes much sense, but ok, it’s what we’re working with.

He can also use his stretchy arms to grab items and things like ladders in the world.  It’s sort of like Earthworm Jim, if Earthworm Jim wasn’t as polished, or as awesome.  You can swing and climb and use momentum to get places, but again, it all feels clunky and unintuitive.  But at least it’s a little fun to swing around sometimes.  No guns or particularly fun atmosphere in this game like in Earthworm Jim, though. 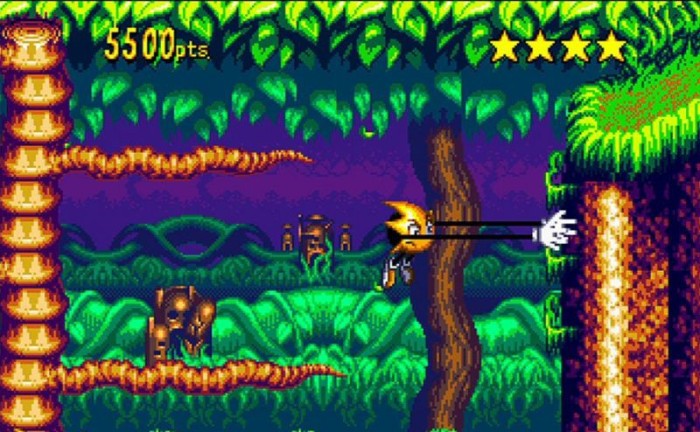 Lots of this sort of thing, though.

Seriously, the atmosphere in this game is basically ripped-off Sonic the Hedgehog levels and music with a slow star as the hero.  Though that makes sense, as I’ve learned that it was developed by Sonic Team.  It’s also very disappointing, as it came just after Sonic & Knuckles, which I consider to be a great game with much more precise mechanics and controls.  Ristar just feels like it’s from a different time than the Sonic games.  It feels like it should be for toddlers but is much more difficult than what a toddler could handle.  The bad controls caused me to get hit and die way more often than they should have.

There was one mechanic that I did enjoy that should have been more the emphasis of the game than it was.  You can jump onto these bars that are sticking out random places in levels an swing around them, gaining tremendous momentum, then go flying after he lets go.  He’s essentially invincible if he has enough momentum and doing this gives one of the few thrills you can find during the game.  They should have made a game more focused on this interesting mechanic, I would’ve been much more excited about that. 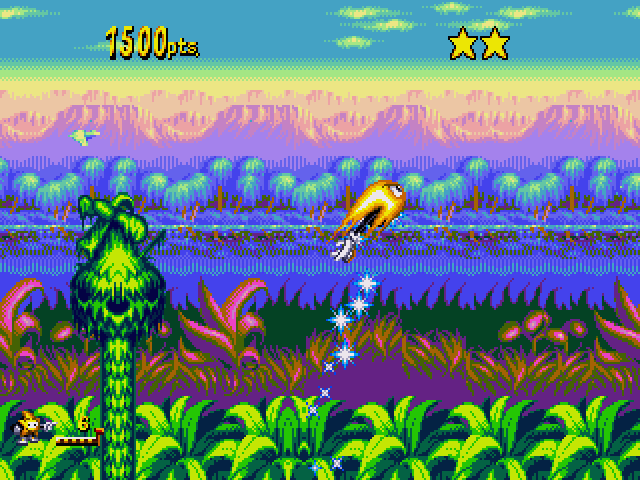 Yeah, he can fly and looks cool when he does, but let’s have him grab stuff with stretchy arms, that makes much more sense.

All in all, Ristar is a disappointing platformer that has slightly worse elements of much better platformers.  There is potential for a good game in there, so I get why there’s apparently still some fans clamoring for a sequel, but this game isn’t what I would call well made.  It’s not bad, but it’s not quite anything good, either.

4 thoughts on “Ristar – Not Quite Anything Good”