Man, the 90s were a hell of a time, weren’t they?  We had LA Lights, The Fresh Prince of Bel-Air, and The Death of Superman.  It was a glorious time for our culture, and you know what video games got?  What the weirdness that was the 90s birthed?

That’s right, the one and only Earthworm Jim!

I recently went and purchased the HD redo of the game on PS3 to relive a part of my childhood, and I gotta tell you, I was not disappointed.  Earthworm Jim is challenging and fun, and I have no regrets for buying this re-skin of the game.

For those unfamiliar with Earthworm Jim, the premise is pretty simple.  In fact, take a moment to let the cartoon theme song explain things to you.  You won’t be sorry you did.  Click below: 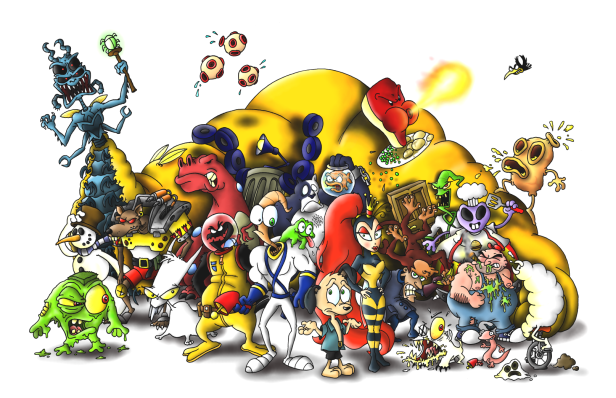 So that’s the gist of it.  Jim’s an earthworm, a supersuit fell upon him, now all the bad guys are trying to get at the suit and he’s trying to save Princess What’s-Her-Name.  You have a gun and a turbine engine that you ride through space, and the whole game is pretty fuckin’ rad.

The shooting and platforming is well implemented, even though sometimes it’s annoying trying to whip your head and attach to a hook.  It’s like, right there and I’m pressing the button but he just won’t grab it!  But even though some of the platforming is clunky, that is a minor gripe and once you get the hang of the quirks, you can usually manage just fine.

There are also riding levels where you shoot through the damn galaxy on your “ship,” which is basically just a crotch rocket.  And that’s literal.  It’s a rocket between your legs that you blast through space on.  Those levels are race levels where you collect orbs and can choose to go a normal pace or really really fast.  Fast is always better in these levels, and way more fun.

But the real draw for this game is the comedy.  And by comedy, I mean oddities.  The game is just so gloriously 90’s strange that it’s hard not to love it.  You’re an earthworm in a super suit, your main enemy is psy-crow, there are other enemies like Evil the Cat, Queen Slug-for-a-Butt, Bob the Killer Goldfish, and Professor Monkey-for-a-Head (notice a trend?).  You launch cows, you get teleported by toilet seats, you whip enemies with your head and use it as a helicopter.  It’s clearly trying to be super weird and you love it for that.

Additionally, the HD remake added some multiplayer levels that are actually really fun.  You wouldn’t think this sort of game would lend itself towards multiple players, but it’s actually a hoot to be able to blast away enemies and figure out some simple puzzles together.

I’m actually really sad that Earthworm Jim has sort of fallen by the wayside in recent years.  While Earthworm Jim and Earthworm Jim 2 were quite good and well-received, other games in the franchise did not fare so well after them.  Apparently the original developer was not involved after the first two, and the games suffered as a result.  I remember Earthworm Jim 64 coming out and everyone straight-up hating it.  It’s sad that he’s no longer a prominent character in games, as he was a huge part of my childhood and his world is so creative and fun.

But we still have the first 2 games to play, and I’ve since ordered Earthworm Jim 2 for the Genesis and am looking forward to plowing through that very soon.  Great game, Earthworm Jim, worth the 9.99 for the HD remake.  It is decidedly

Hey, thanks for reading my ramblings on Earthworm Jim!