I’m unabashedly a Teenage Mutant Ninja Turtles fanboy, as anyone who’s seen my tattoo can attest to. The 1990 movie is as quality a movie as one could possibly ask for, the 2nd live action movie was dumb but still fun, the less said about the 3rd live action movie the better, but the cartoon movie in 2007 was great again. The original cartoon series I loved as a kid, though I’m sure it’s unwatchable now, and the other 2 cartoon series since then have both been quality, as well. The 2014 movie was better than I thought it was going to be, and I sure as hell was skeptical. So it’s safe to say that I’ve been a fan for my entire life, so when I say that this movie really didn’t let me down, know that I’m saying it as someone who harbors great affection, and protective tendencies, for these characters.

From here on out, there be SPOILERS!!! You’ve been warned, dudes. 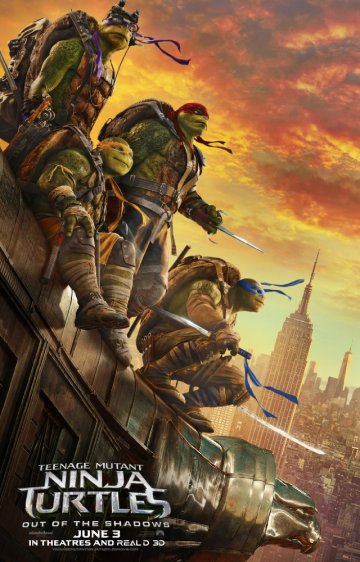 First off, the movie improved upon the design of the turtles from the 2014 movie. Many of the changes are subtle and revolve around their actual clothing as opposed to physicality, but all the changes are for the better. While I still would prefer my ninja turtles to not be giant beasts, the incremental changes do make them more acceptable. Their wardrobes are all slightly changed for the better, I feel like their outfits aren’t trying so hard. I guess the turtles are growing up. I especially love Donny’s SNES controller. Respect to the nerd. Additionally, and I may be imagining things, but they seem slimmed down some, so they’re not quite as gigantically massive this time around. Except for Raph, if course, the muscle. And I could be wrong, but the colors of the turtles also seem more vibrant. Maybe they’ve bathed recently and washed their masks, I dunno. Either way, I think the turtles all look a lot better this time around.

But the real highlight of this movie is the characterizations and interactions between the turtles. You really do feel like these guys are a living presence and that they have both a history with one another and a real affection for each other. They feel like a family, like brothers who get on each other’s nerves while still knowing how to make one another laugh and have a good time just hanging out together. The group feels much more like a family, Splinter included, than they did the first time around, and I really enjoyed watching them interact on screen with one another.

The plot is just meh, however. Shredder escapes police custody, gets told by Krang to open a portal to let him through so they can conquer Earth, and gives Shredder a new kind of mutagen to make mutant soldiers to help him achieve his goal. The turtles have to stop them. I’m not saying that a movie like this has to have a complicated plot, but it’s pretty basic. You have subplots of Casey Jones getting stonewalled at work as a prison guard, causing him to become a vigilante, and the turtles fighting over whether they should use the new mutagen to become human, but ultimately they don’t go much of anywhere. Casey never really gels well with the group, becoming the butt of jokes among them more than anything, and we know that the turtles aren’t going to turn themselves into humans, so that’s a non-starter, too. You do get some good stuff about Leo accepting his brothers for who they are and trusting them more, but that’s really the most substantial character growth we get out of it.

Even though the plot is just so-so, it does get us from exciting sequence to exciting sequence pretty well, so I can’t be too hard on it. From the very beginning, with the turtles flipping around skyscrapers and bouncing off one another, the movie has some excellent action. And, of course, the majority of it is CGI, but fortunately, the digital animation is truly excellent in this film. The actions, save for a few, all feel realistic and they have some heft to them. You almost never feel as though you’re watching a cartoon, even though this movie is as close to a live-action version of the old cartoon as we’ve ever been. One of the moments that felt too cartoon-ish, though, was when Raph splats on to the front of a plane. Silly and meant to get a giggle from the kids, it really undercuts the feeling that these are real characters when things like that happen. He should be a green smear. However, that instance does kick off one of the more impressive action sequences in the film, starting in the air, crashing the plane into a river, and dumping the turtles over a waterfall. A pretty damn impressive sequence, even if, again, it was almost 100% CGI.

As far as I can recall, however, this action scene is really the only interaction the turtles have with Bebop and Rocksteady, which surprised me. I expected them to dog one another throughout the entire film, but this was really all we got. It’s too bad, because Bebop and Rocksteady were truly great characters. Thugs who reveled in their mutations, enjoying the power without lamenting the loss of humanity, they were really great additions to the cast. Not to mention that the actors, Gary Anthony Williams and Stephen Farrelly gave really entertaining performances, making Bebop and Rocksteady funny, in an appropriately juvenile way, and endearing.

Really, all the actors did a fine job in this film with what they were given. Except for maybe Stephen Amell, he was kind of miscast as Casey Jones, I think. I like him on Arrow, but as Casey Jones he came off as more whiny than tough and angry. Perhaps if he had his stupid voice-deepener thing from Arrow he would have been better, but it just didn’t work too well for me. Laura Linney was good as the angry police chief, Will Arnett continued to bring the sexy, even Megan Fox did well as April O’Neil (my girlfriend even said she could tolerate her, and she hates Megan Fox). And the turtles were all fantastic. Noel Fisher, Jeremy Howard, Pete Ploszek, and Alan Ritchson were all great playing the four brothers. I always looked forward to when they were on screen together, they made the turtles feel alive. Very well done.

While I do wish that there was more of a plot than “Here comes Krang and the Technodrome, go fight ’em!”, this movie undeniably was very fun. Stupid at parts and there were some elements that didn’t work very well, but I found myself grinning throughout the whole thing. I would definitely recommend this movie for anyone who wants some fun action and really, to feel like a kid again.